Here, I will explain what happens when you use the virtual keyword in C++.

I will use many code examples, so don't worry if you don't understand something, look at the code example and it would be ok :)

When you use a pointer to a base class that was instantiated from a derived class, you can use the virtual keyword to call functions from the real instance.

Ok, we understand how to use the virtual keyword, but how the compiler manages to call the correct function?!

When one of these classes is instantiated, it gets an extra variable member (called vptr) that will contains a pointer to its vtable. 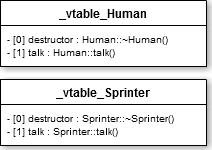 You have to know that when you compile a C++ code, the class functions are transformed into regular functions having an extra parameter: a pointer to the instance of the class, named "this" (yes, that's where the "this" pointer comes from).

So, a class function void Human::talk(); could be transformed to a C function like void _human_talk(Human* this); (you can Google C++ name mangling if you are interested to know how compilers name symbols after C++ function names).

To simplify, let's use a FuncPtr type as a basic pointer to function: typedef void (*FuncPtr)(void* this);

When you call a virtual function, the compiler just has to look at the vtable to call the correct function.

For your information, you can call a specific implementation of a class function by explicitly naming it:

# this pointer and virtual functions

Sometimes, the compiler has to do a little bit of arithmetic to pass the correct this pointer to a virtual function.

Imagine a class Centaur that inherits from both Human and Horse:

Here is a possible memory representation of the Centaur class (note: in this example, the compiler optimizes the memory by using the same vptr attribute for both the Human and Centaur classes): 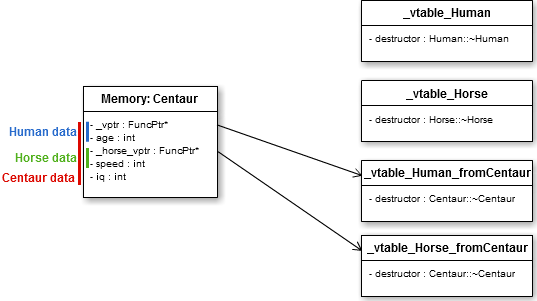 So, what happens if we delete an instance of Centaur through a pointer to Human?
As the data for a Human and a Centaur starts at the same position in memory, no special operations are needed. The this pointer is the same for both classes.

But what happens when we use an instance of Centaur through a pointer to Horse?
Well... the static cast from a Centaur pointer to a Horse pointer will move the data pointer from some bytes (from the Centaur data to the Horse data).

So, when you delete the "horse" pointer that is an instance of Centaur, how the compiler passes the correct this pointer?

A way to do that (the g++ way!) is to use a "wrapper" that will modify the this pointer then call the correct function.

I hope this explanation helped you to understand how the "magic" of C++ really works!
Please tell me if I made some mistakes or if something is unclear. Thank you!